The NFThemis Art & Justice concept to defend values that should be transparent (children, education, ecology etc.), is not only the result of a parent's experience with the German judicial system, it is also the will of this parent to highlight a system that has been " legally " dispossessing thousands of European parents of their children for decades.

Often isolated, desperate, with very little support from their political representatives, and with few economic resources to fight a war machine; the Jugendamt, with a budget of 35 billion € in 2018, equivalent to that of Defence for our country that same year, and 800,000 civil servants to run a machine that produces thousands of European orphans who have both parents alive, but one of whom has the fault of no longer living on... German soil.

Why link this issue of " stolen children " to the issue of Volkswagen' s " Dieselgate "?

The similarity of the methods used to deceive European citizens (ecological bonuses paid by all, profits for Volkswagen, fines and compensation paid only to the strongest (USA) or to German citizens, while refusing them to Europe's partner countries, impunity of the leaders (successive postponements or payments of millions of € in exchange for the abandonment of lawsuits), unabashed allusions to Nazism on the part of its leader Herbert Diess "Ebit macht frei", etc.) should allow us to take a closer look at this Franco-German couple widely fantasised by many of our fellow citizens or politicians, should allow us to take a clearer look at this Franco-German couple, which is widely fantasised about by many of our fellow citizens and politicians.

The priority given to parents living on German soil for the choice of residence and schooling of the child is a counterpart to the compensation which is only granted to owners residing on German soil at the date of acquisition of their rigged vehicle.

The same practices and manoeuvres were employed 50 years ago by the laboratory Chemie Grünenthal GmbHThe same practices and manoeuvres were used 50 years ago by the German manufacturer of thalidomide, which caused the death and malformation of tens of thousands of children in almost 50 countries. Compensation for German and Australian victims. Public apology after 50 years of silence, and unveiling of a bronze statue for all other victims.

Today, we know from a study by the Massachusetts Institute of Technology (MIT) that the excess NO2 (nitrogen dioxide) produced by the rigged vehicles of the Volkswagen group can reduce our life expectancy by 10 to 20 years. And therefore those of our children.

Moreover, participating in the repatriation of the €20 billion fine that Volkswagen would be condemned to pay in France, if the judges and lawyers were supported by the political authorities, is a highly civic-minded act since it also prevents this amount from being levied in the form of new taxes(€300/inhabitant).

As for the 950,000 French victims of the Volkswagen scam, they should be concerned by the statements of the European Commissioner Didier Reynders, in charge of Consumer Protection, who pinned the "unwillingness" of the German group, asking it to"act as decisively outside Germany as it does in Germany". This was last September.

"The risk Volkswagen faces in this case is a reputational risk," he said. "It's really a consumer confidence issue.

Supporting these first two causes by downloading the NFThemis " Political Prisoner " or " Volkswalügen ", sharing them on all your social networks will impact the reputation of a predatory organization, the Jugendamt, and the seriousness of a manufacturer that in 2014, in its excessiveness had even appropriated even the concept of the car; " Das Auto ".

If you think you are not affected by either of these two causes (I have never owned a German car), you have financed ecological bonuses and pollution knows no boundaries.

The tens of thousands of European children in "Forced Residence" on German soil also reinforces the dominant position of Germany in all European institutions, and consequently certain political and economic choices that will be imposed on you.

To denounce jointly the similarity in the mode of deception and behaviour towards the victims, reinforces the visibility of these two scandals which in this case come from only one country; Germany.

Toinvolve the other European countries by translating these NFThemis into all the languages of the EU, is to widen the field of battle in order to force the representatives of our country, which holds the presidency of the Council of the European Union for 6 months, to commit themselves by strong acts alongside the French judges and lawyers (Volkswagen affair), and to pose as defenders of the children of French nationals who have, as in the case of my son, absolutely no filiation with Germany, but are deprived of a schooling in Brittany

So don't hesitate to download one or more NFThemis in French, Italian, German, Breton or Mallorcan etc., and use them to illustrate all your messages on social networks. Offering them as gifts to collect to the children of your entourage will allow them to improve their knowledge of foreign languages, but also their knowledge of geography, history etc., and to appreciate even more those moments of festivity that they have the chance to spend with the parent of their choice.

This NFThemis " Political Prisoner " challenge is of course addressed to the entire Ministry of Education (in this second year of the great national cause - reading), including Jean-Michel Blanquer and Emmanuel Macron, our country's representative at the presidency of Europe, as well as all their European counterparts.

Thank you for your support.

Genesis of a German policy to repopulate an ageing country. Jugendamt.

For those who doubt the relevance of this concept of " Forced Residence", which it is now necessary to popularise in all countries to warn parents; its implementation by German institutions with regard to ALL children as demonstrated by this example of a married couple who moved only a few kilometres away - but to France -will enable them to be enlightened on this criminal state practice.
In spite of the onerous and unsuccessful appeal to 4 different lawyers to get their children back, they had no alternative but to make them cross the border during one of the 2 hours/week authorized visits during which they were obliged to speak in German. Interpol, 3 month prison sentence, parents described as very dangerous... This is happening on our doorstep and on a daily basis.

"Fighting alone with a slingshot against a division of panzers".

Rape of a minor child followed by murder by a person with parental authority - Dr Krombach - (German with political protections). Case closed after one month by the German justice.

The father of the murdered child, André Bamberski, is a model of courage and tenacity whose story should be taught in all European law schools.

13 years of solitary struggle to obtain a trial in France. And a conviction in absentia which was only accompanied by an international arrest warrant two years later, following the insistence of André Bamberski. A warrant that was never executed, neither by Germany nor by Austria.

Germany, on the other hand, constantly uses Interpol or the EAW (European Arrest Warrant) to bring children of undivorced or divorced parents back to its soil. Or even to recover unpaid maintenance payments from parents deprived of their child. France almost always complies with its injunctions.

"Kalinka / In the name of my daughter" (Film trailer)

These two films, the first of which is no longer to be presented, can be seen from the age of 8 for Charlie Chaplin, and from the age of 11 for the film "Run without looking back". The director of this film, Pepe Danquart, lives in the town of Singen, where my son goes to school and where the court that condemned me for having expressed opinions on the education of my son in Germany and for having represented him as a political prisoner condemned to illiteracy in that country. Extract from the report of the Jugendamt P2 . 23/04/2021.

Read the article: "The flapping of Mrs Merkel's wings and the butterfly effect of her decisions".

"Run without looking back (trailer) 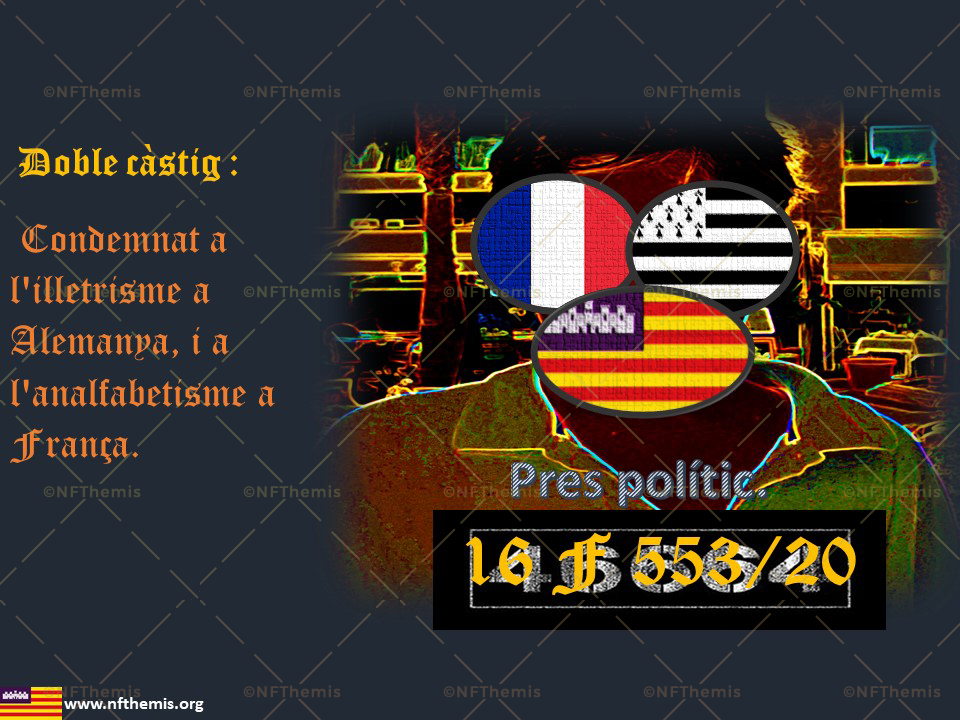 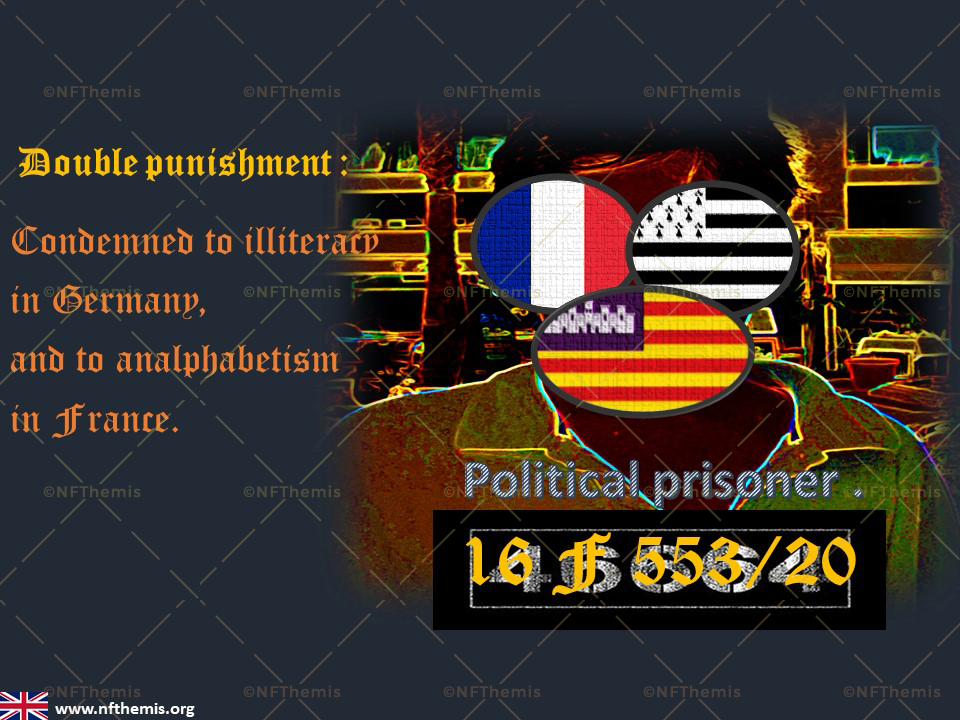 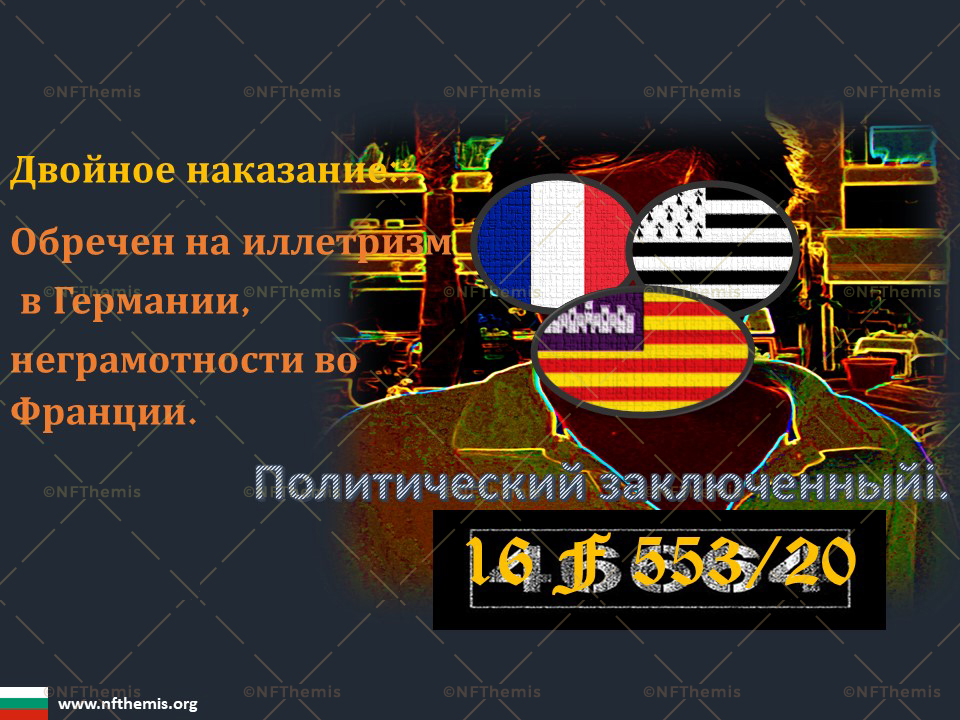 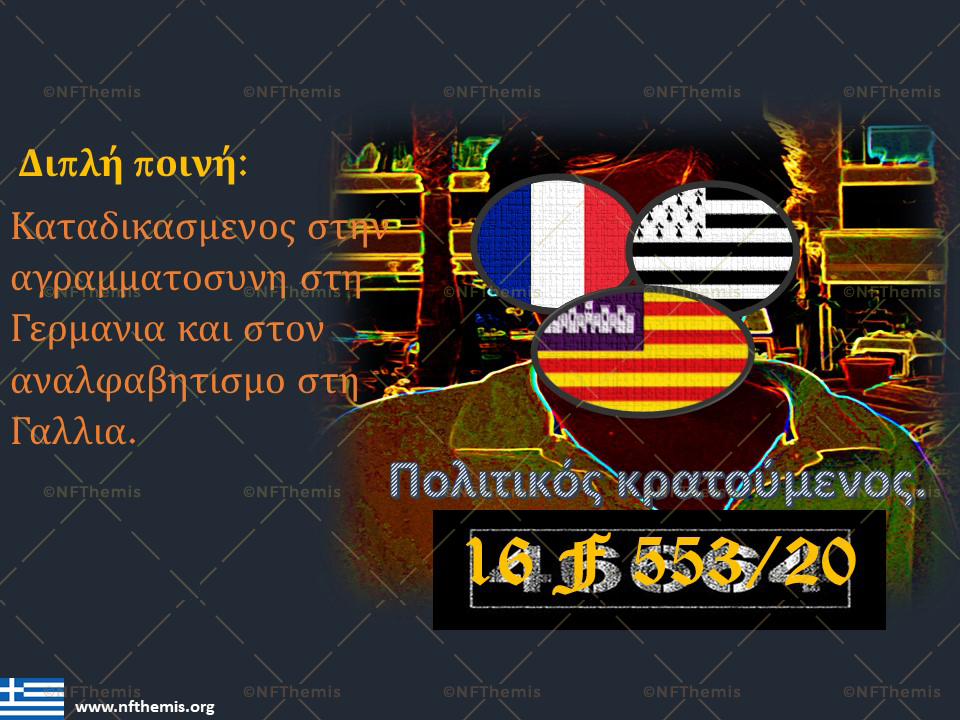 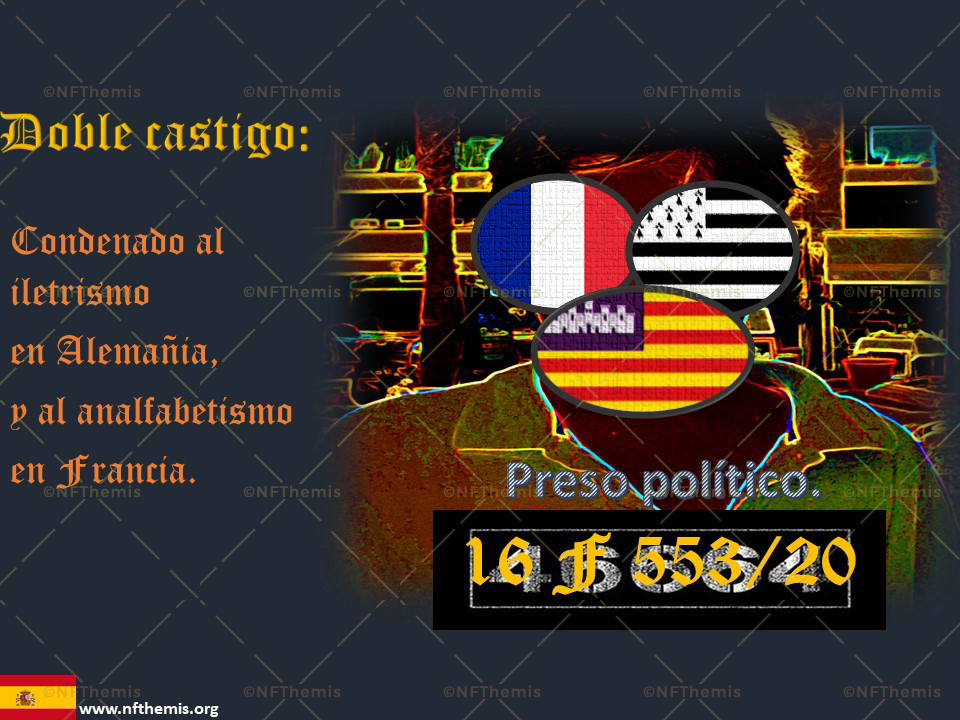 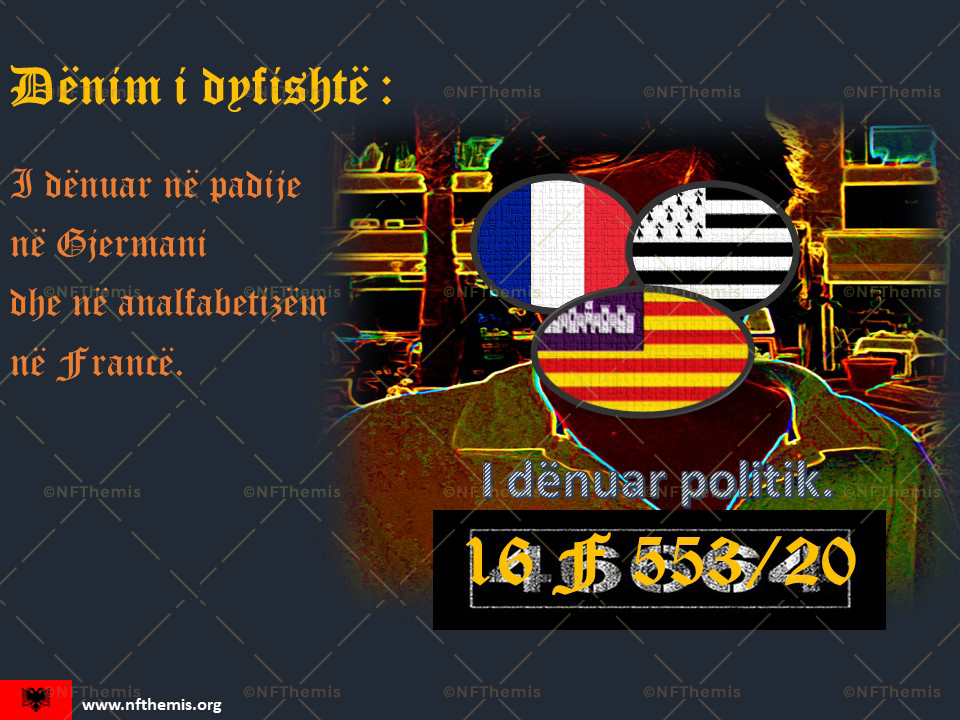 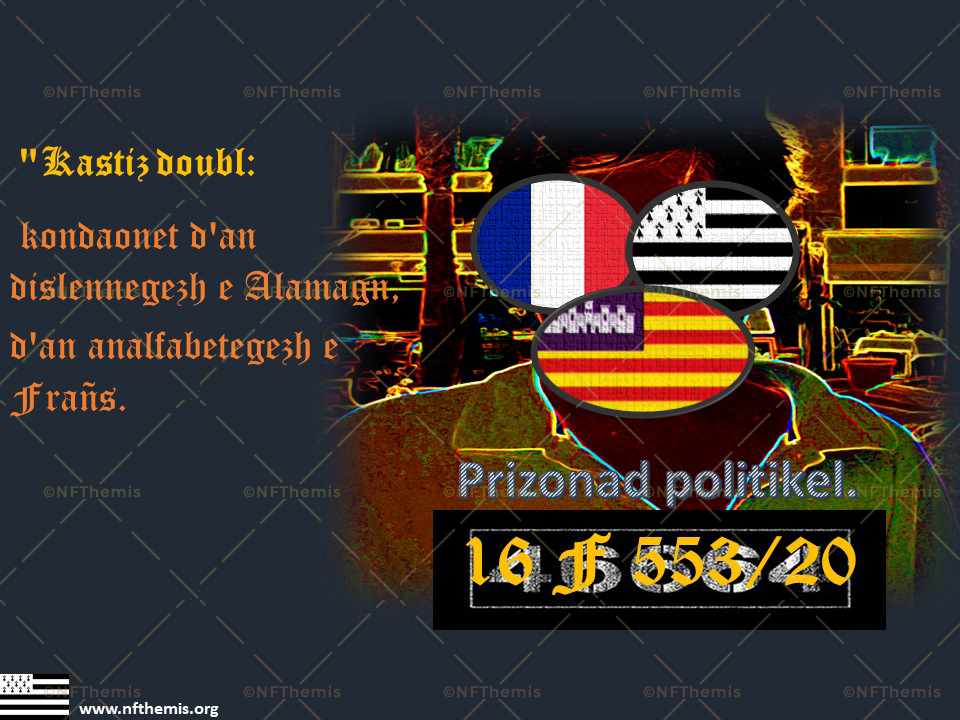 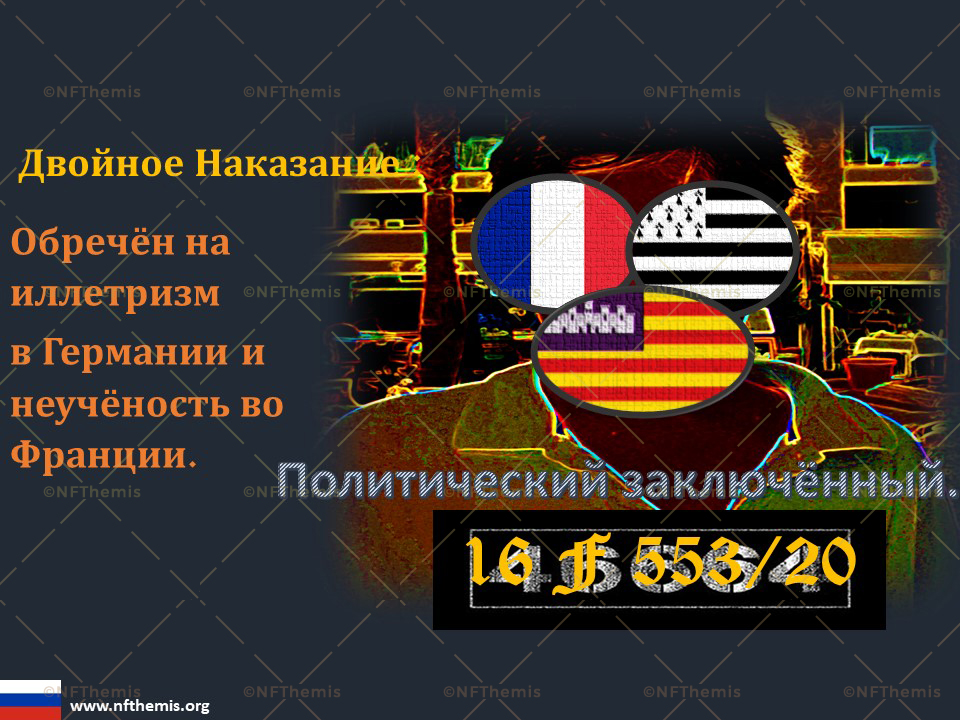 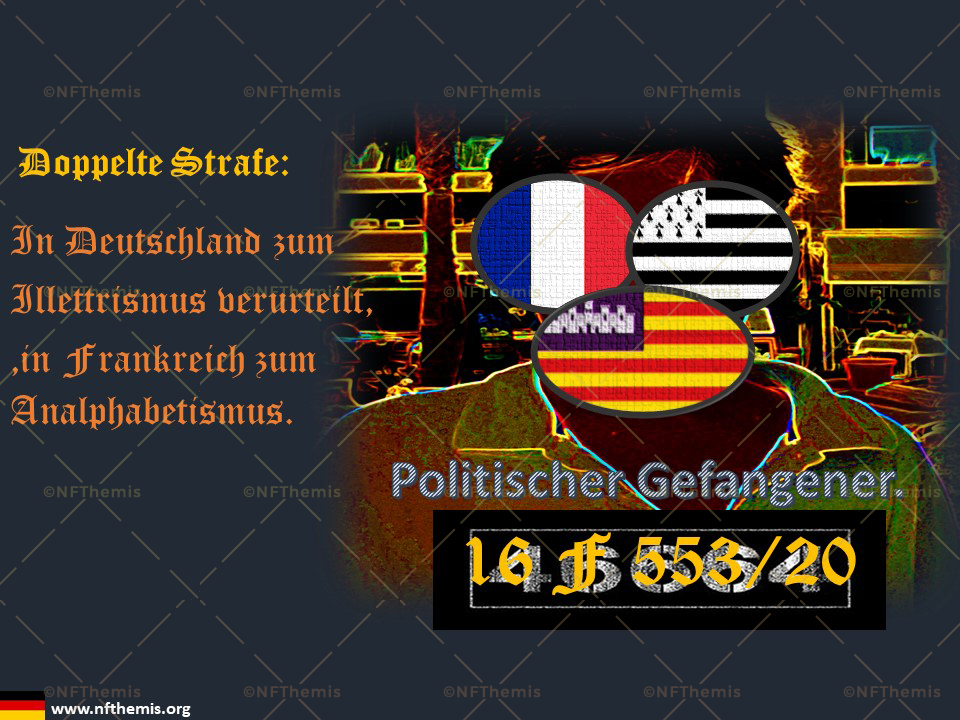 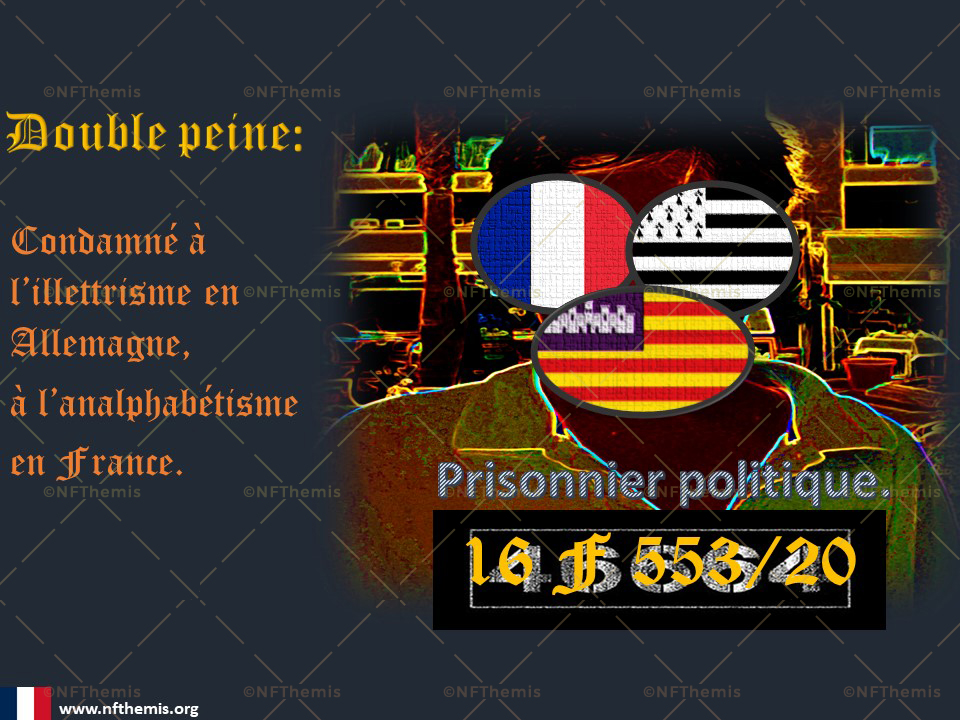 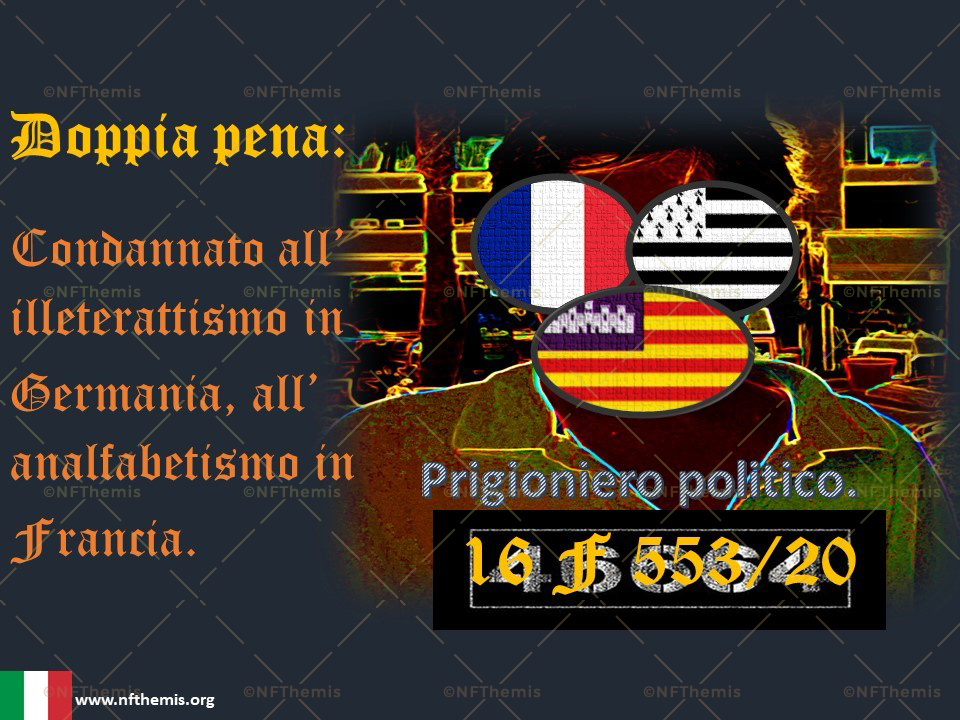 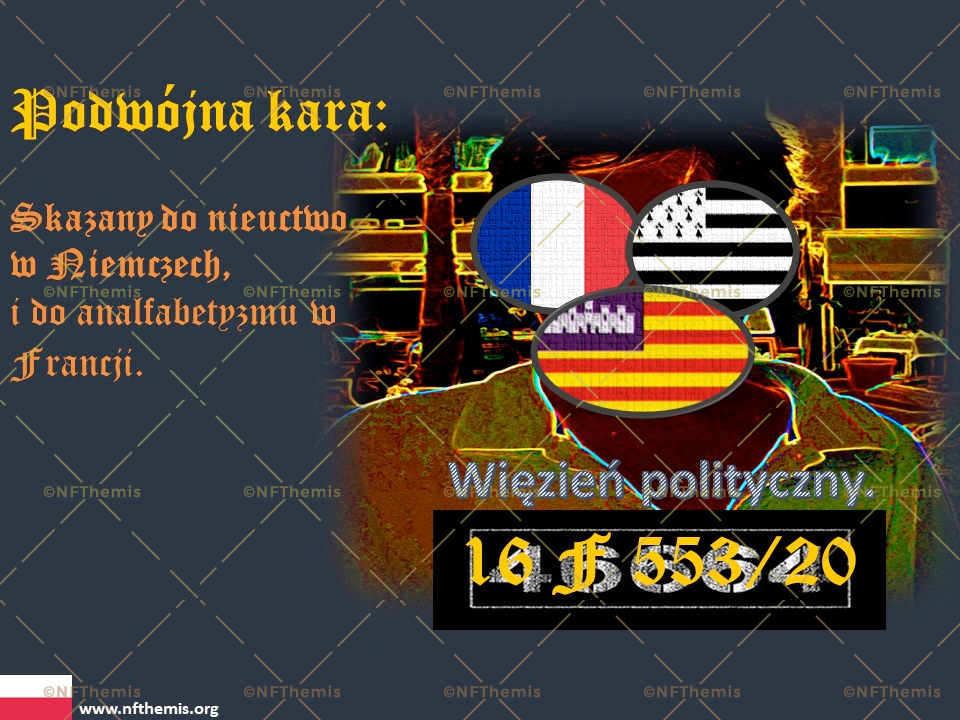 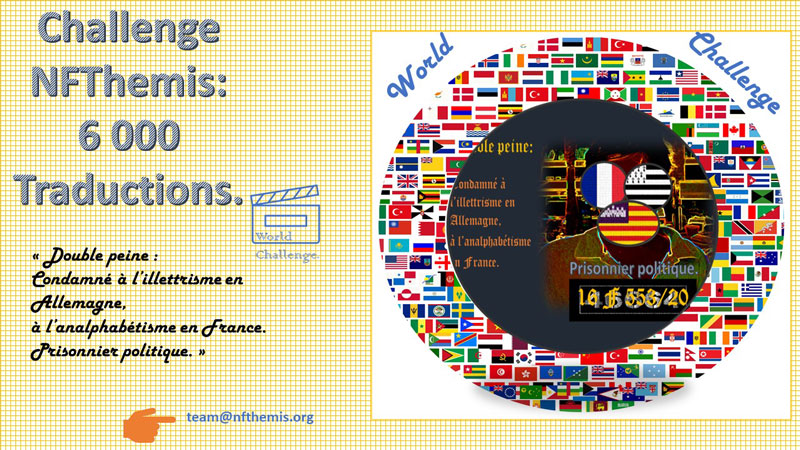 Doyou have a perfect command of one of the missing languages and would you like to join this challenge? Send us your translation by email. The plan is to honour all translators once a block of 100 languages has been translated.

What is the Volkswalügen challenge? 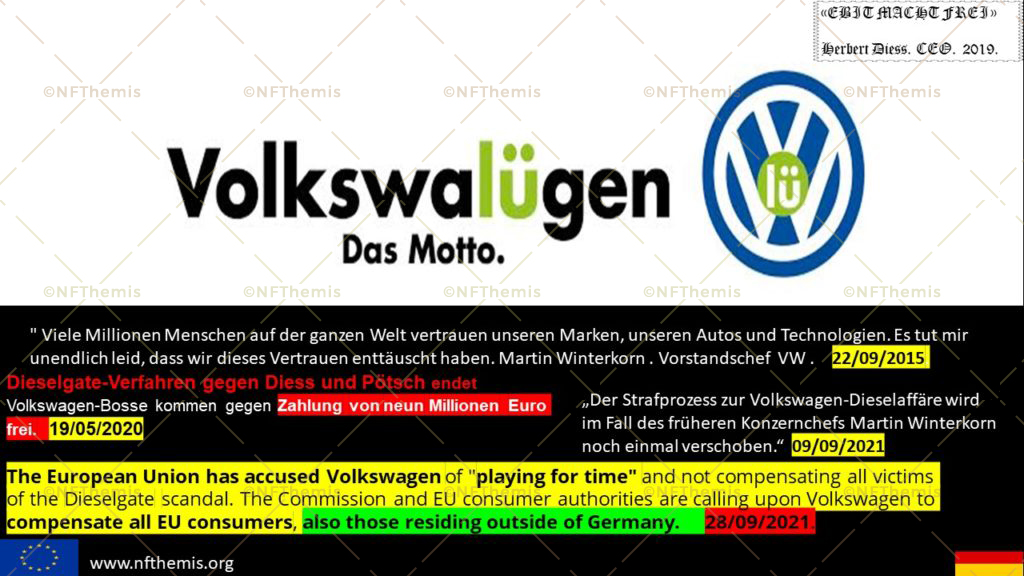 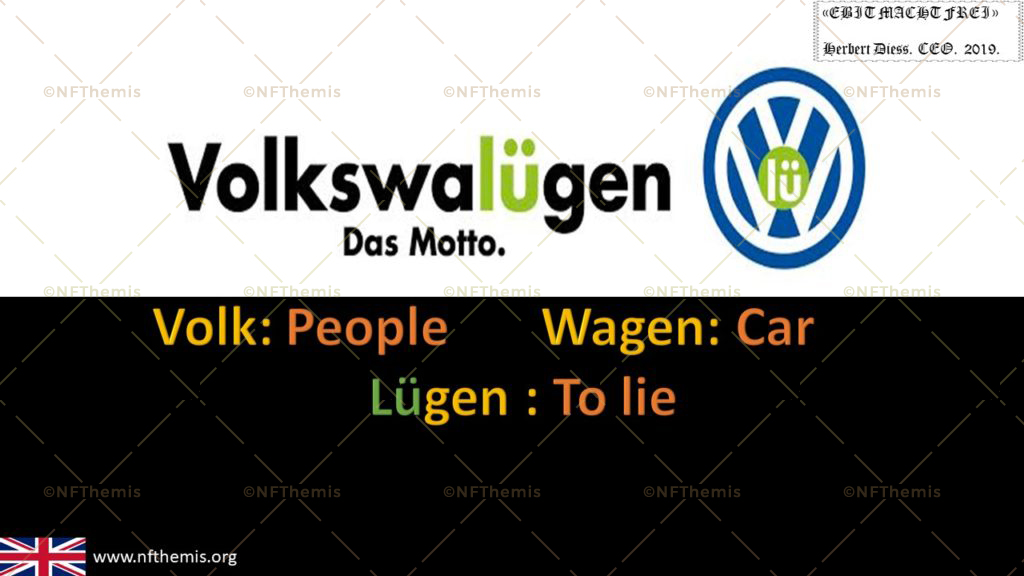 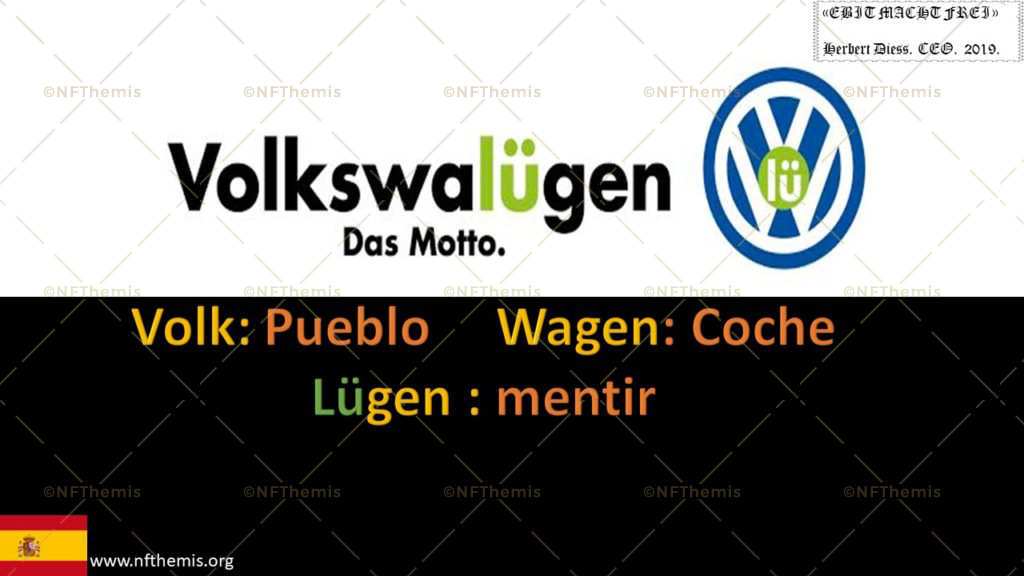 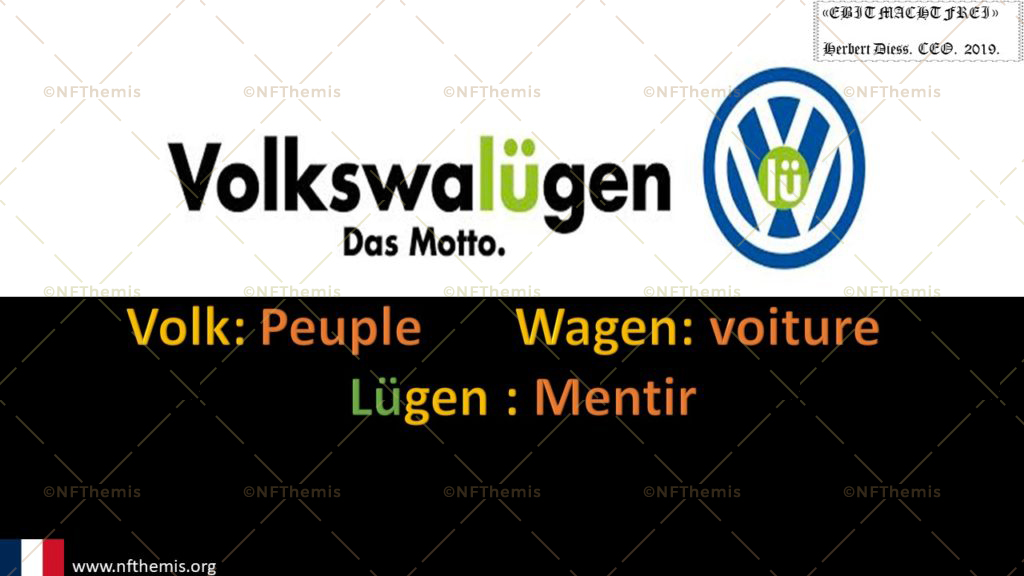 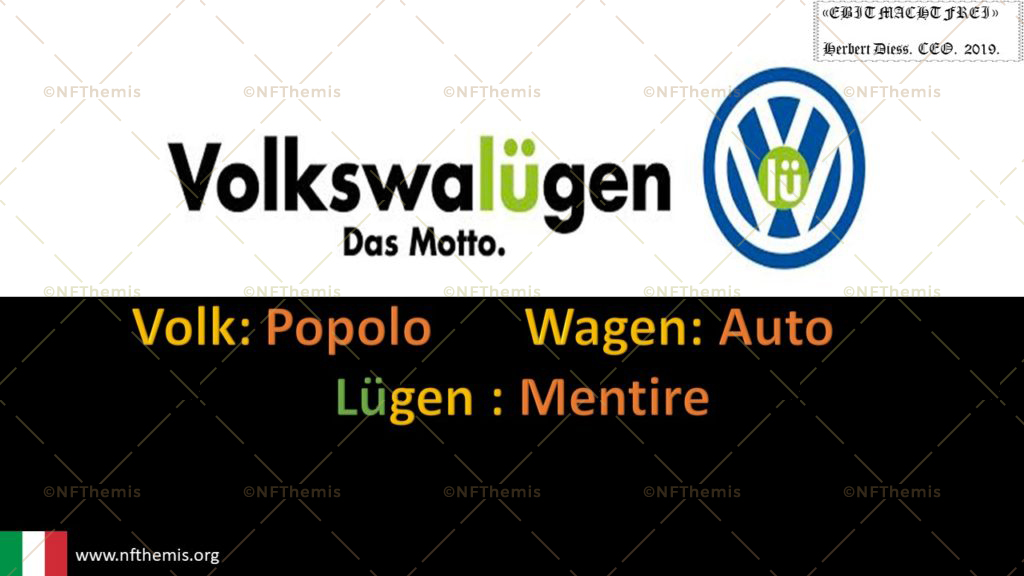 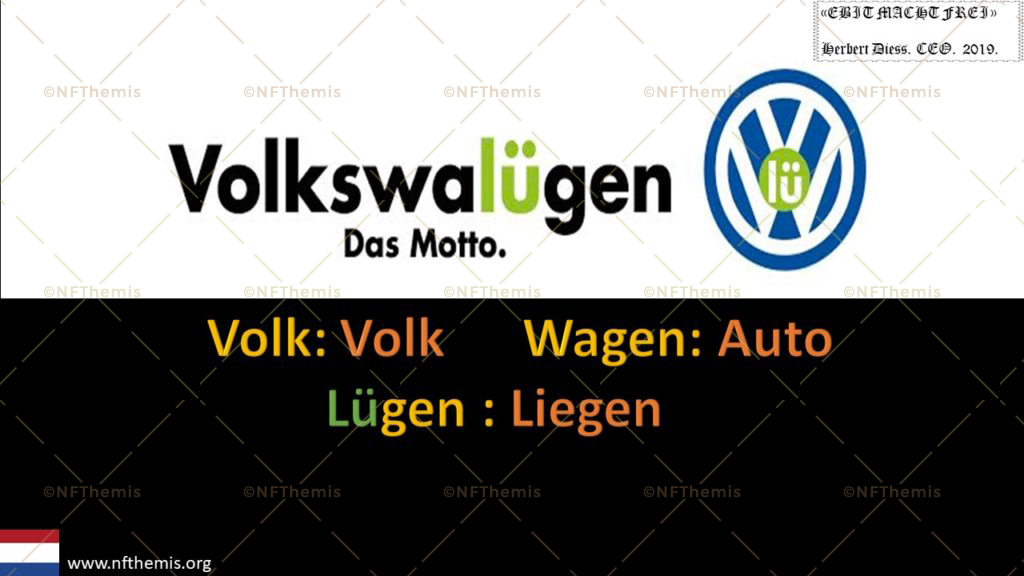 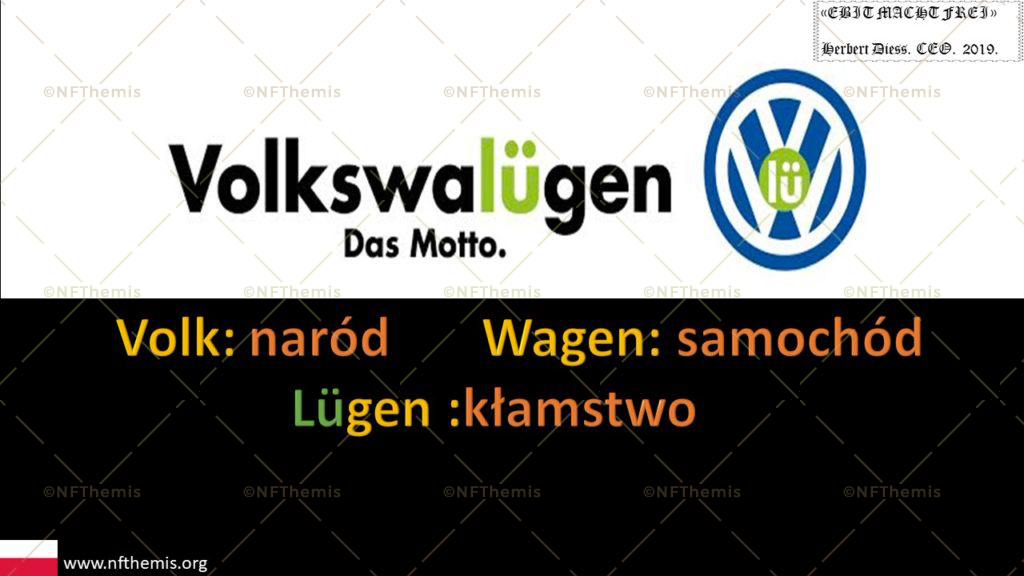 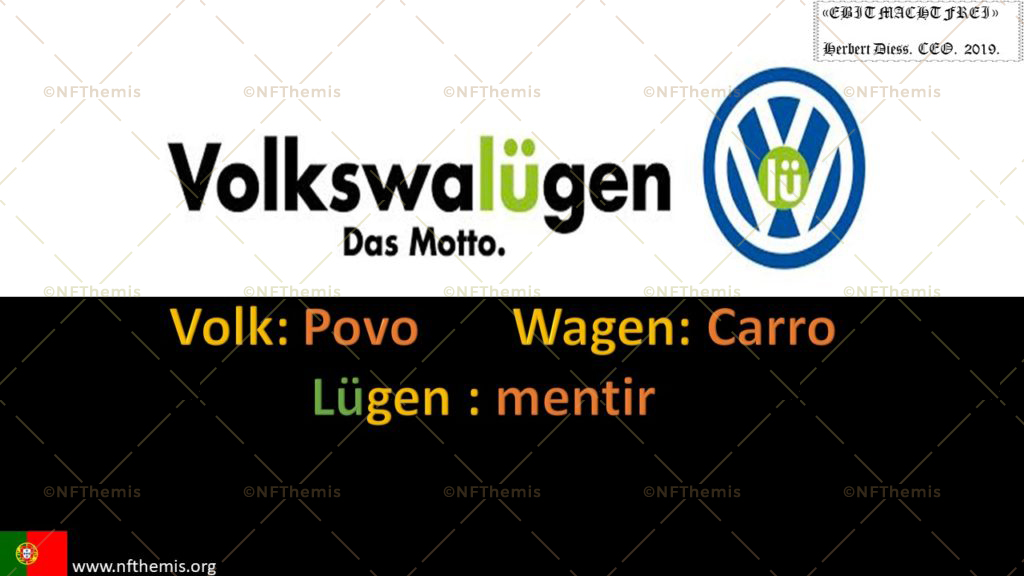 Receive the first 9 NFThemis "Volkswalügen" to support the Challenge and defend the quality of the air we breathe. 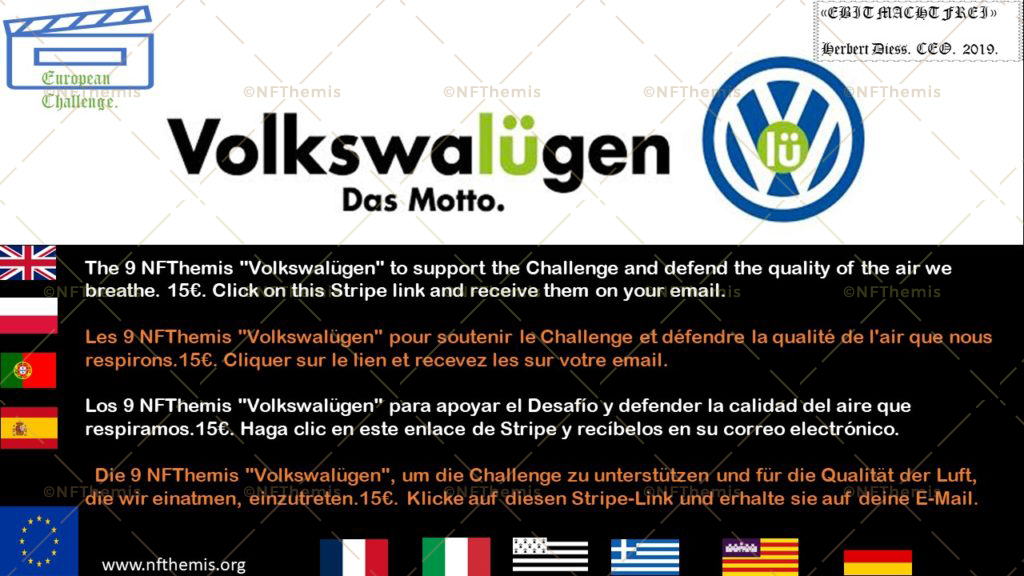 With our Stripe payment system, receive links* and share them with others to support NFThemis' causes.

*On request after the first support payment 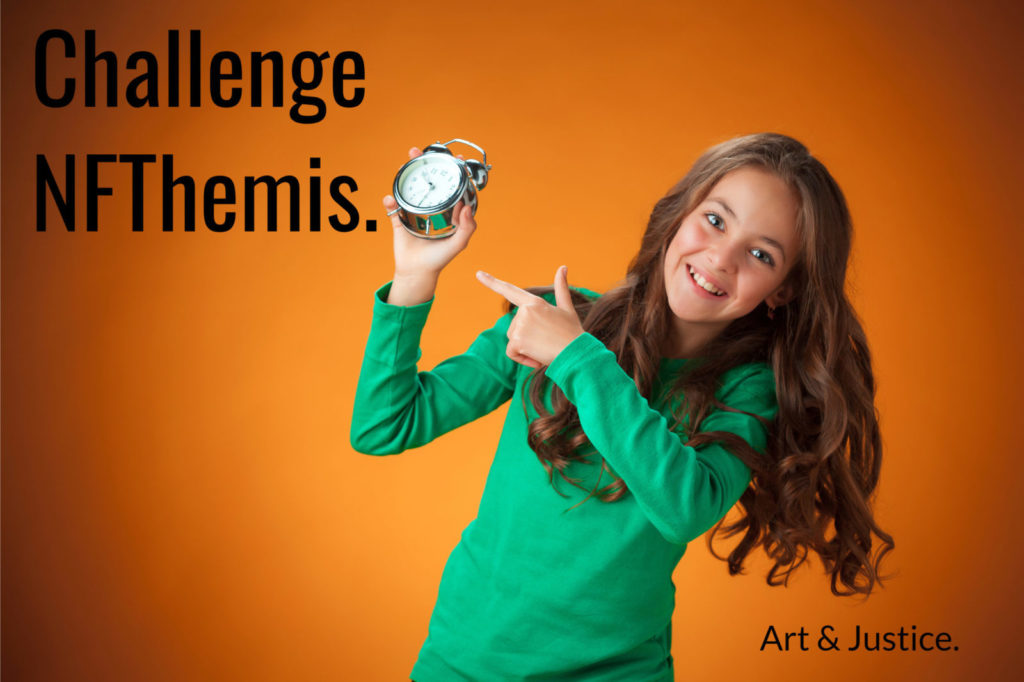 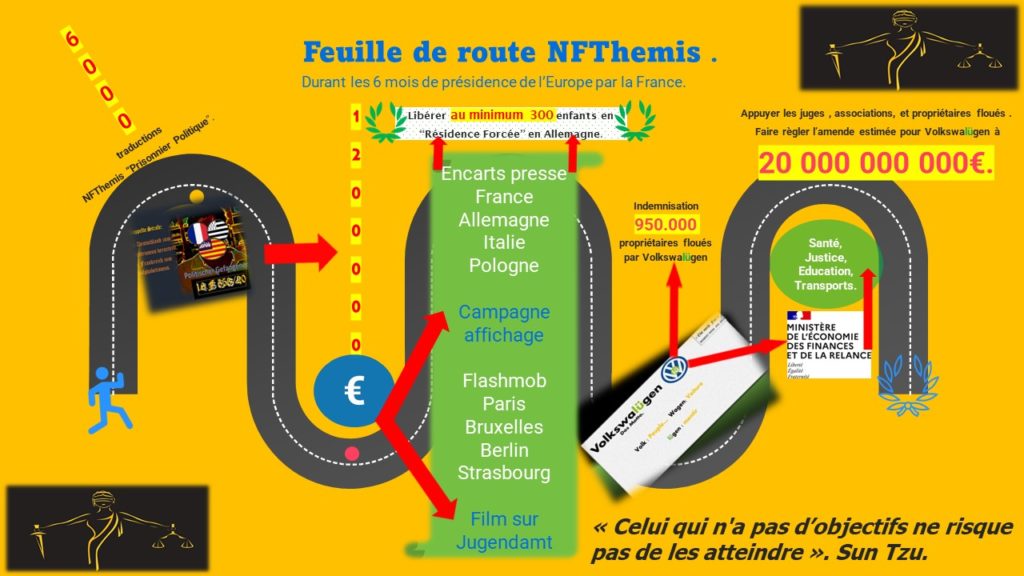 "Iron rusts from lack of use, stagnant water loses its purity and freezes from the cold. In the same way, inaction saps the vigour of the mind." Leonardo da Vinci.

We use cookies on our website to provide you with the most relevant experience by remembering your preferences and repeat visits. By clicking on "Accept All", you consent to the use of ALL cookies. However, you can visit "Cookie Settings" to provide controlled consent.
Cookie settingsAccept all
Manage consent

This website uses cookies to improve your experience while you navigate through the website. Out of these, the cookies that are categorized as necessary are stored on your browser as they are essential for the working of basic functionalities of the website. We also use third-party cookies that help us analyze and understand how you use this website. These cookies will be stored in your browser only with your consent. You also have the option to opt-out of these cookies. But opting out of some of these cookies may affect your browsing experience.
Necessary Always on
Necessary cookies are absolutely essential for the website to function properly. These cookies ensure basic functionalities and security features of the website, anonymously.
Functional
Functional cookies help to perform certain functionalities like sharing the content of the website on social media platforms, collect feedbacks, and other third-party features.
Performance
Performance cookies are used to understand and analyze the key performance indexes of the website which helps in delivering a better user experience for the visitors.
Analytics
Analytical cookies are used to understand how visitors interact with the website. These cookies help provide information on metrics the number of visitors, bounce rate, traffic source, etc.
Advertisement
Advertisement cookies are used to provide visitors with relevant ads and marketing campaigns. These cookies track visitors across websites and collect information to provide customized ads.
Others
Other uncategorized cookies are those that are being analyzed and have not been classified into a category as yet.
Save & Apply